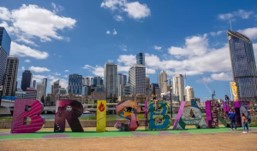 There is no shortage of major attractions to visit and explore in Brisbane. Across the river from the CBD, South Bank is home to our Cultural Centre with the world-class galleries and entertainment. Besides the big cultural attractions, Brisbane has two major sports stadiums, Lone Pine Koala Sanctuary and the Story Bridge to climb.

Further afield the regions including the Scenic Rim, Somerset and Lockyer Valley have no shortage of waterfalls, lookouts and mountains to climb, while Moreton Island is the place to feed wild dolphins and snorkel around an old ship wreck.

Find an inspiring collection of places to explore in and around Brisbane. From the natural pleasures of parklands to the urban appeal of art galleries - it's right here. Wining and Dining. Urban village hotspots. Nights out on the town. Beds and boutique hotels, shopping and cinemas and everything in between.

A river curving and curling its way around the landscape makes Brisbane one of the most unique capital cities in Australia. Brisbane came into being long before the state of Queensland was established, when intrepid Surveyor General John Oxley named the river he discovered after the Governor of New South Wales – Thomas Brisbane – in 1823.