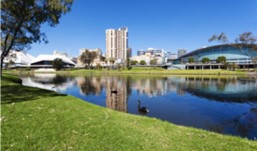 Adelaide is quickly becoming the lifestyle capital of Australia. Once considered a sleepy city, Adelaide has undergone a rapid transformation with a burgeoning small-bar scene, world-class art and music, and a festival calendar to rival that of any other Australian city.

Discover its laneway secrets, take in the stunning flora at the Adelaide Botanic Gardens, and find delicious treats around every bend.

In the city centre, Adelaide’s laneways and side streets are being transformed with hidden bars and eateries. Along Peel Street enjoy a whisky at Clever Little Tailor or espresso martini at La Moka. Hains & Co is a sailor-themed bar tucked down Gilbert Place, specialising in gin and rum.

One of Adelaide’s hottest bars, Proof, can be found on Anster Street, which pairs classic cocktails with tasty share plates and gourmet toasted sandwiches. Underground bar Bank Street Social is the go-to for local craft beer and Australian spirits, while La Buvette Drinkery serves French apéritifs with a side of escargot. Get your caffeine hit at Coffee Branch on Leigh Street, and dine on playful, modern Australian cuisine at Peel St.

Adelaide is recognised as one of the best festival cities in the world, with many falling during February and March. It’s the time of Adelaide Festival, WOMADelaide and Adelaide Fringe, which bring world-class entertainment to the city. Adelaide Festival presents a mix of internationally acclaimed theatre, music, dance and visual arts.

WOMADelaide transforms the inner-city Botanic Park for a four-day celebration of music, art and dance. It also hosts the popular Planet Talks environmental discussions series and Taste the World food and cooking demonstrations.

Adelaide Fringe presents a program covering everything from cabaret to comedy and circus. During the festival more than 900 events are staged in pop-up venues in laneways, warehouses and parks, as well as established theatres, hotels and galleries.